Why I do CrossFit

Lately, I’ve taken to training alone. Mike, my partner, has created a 10 week long program designed to help me prepare for the upcoming CrossFit open. With the advent of a category for 35-40 year olds, we’re hoping I’ll have a fighting chance at making it to regionals. Qualifying to compete at regionals has been a long time goal of mine. The accomplishment would ensure at least 25 more followers on instagram, sponsorships totalling in hundreds of dollars annually, and the admiration from my mom and maybe a few other people.

All jokes aside, the goal is very serious to me. I’ve made the decision to dedicate myself fully to the process. The training thus far has been arduous. Each day’s programming takes hours to complete. Whereas I used to spend my time training with friends, dropping in at local studios, etc. I now train alone in the quiet confines of the gym. I used to get high fives post work out. Now, I’m met only with the echo of dropped barbells. The change in my training habits has caused a crisis in faith. Taining is no longer “fun.” In the absence of that fun, I’ve been forced to ask myself, why do I CrossFit?

Crossfit offers more than just a good time. In my experience, people go to CrossFit for the same reasons people attend church. It offers a temporary respite from their daily grind. They can spend time with like minded individuals, laugh, gossip and leave feeling better for having invested a few hours of their day participating in a fellowship.

As the holiday season comes to a close, I've been putting a lot of thought into religion, values and faith. The holiday’s are marred by a variety of  religious celebrations. People light candles, decorate trees and attend midnight masses. The common string I see is the solidarity communities share in their thankfulness for blessings (both large and small) present in their lives.

Religion and faith are such an important part of the human condition. I've often wondered if it isn't integral for our survival. In the past, I've been very critical of organized religion. Lately I’ve reserved my judgment. I’ve begun exploring the depths of my own soul for answers that I suspect are ethereal in nature. Things I’ll never touch with my own two hands, but feel deep in my heart.

Ive often been told I’m a good guy.  It’s rash characterization made often by those close to me.  I say rash, because I know it’s not true. I'm not a story book villain. I don’t go out into the world with the intent to do harm.  But I am wrought by flaws that plague most men. I lie and I cheat. I act selfishly. I toss aside the feelings of others towards my own ends. I have cruel thoughts. I’ve perpetrated acts I know to be universally foul. I am a bad person. What makes me especially bad, is I know the difference between right and wrong, and I act in spite of this knowledge.

The only evidence I’m not truly malevolent, is the guilt I carry. I grow weary from its weight. It’s the guilt that keeps me running back to the gym. It’s the hope I can shake off the shame in the moments between gasps that keeps me coming back. Others take their sins to a priest for absolution. I take mine to a quiet corner of the gym. Chalk stains the floor, and a familiar musk hangs in the air from countless hours of penance paid by fellow sinners. It doesn’t matter if I’m alone, or surrounded by athletes chanting the hymnals of the stopwatch. I throw my body on the altar steps daily in attempt to wash my soul clean.

During my prayers I can taste the flames I suspect await me in the afterlife. I breathe fire and see white. When the clock runs down and my body comes to rest, I’m often on my knees. My face awash in what could be tears or sweat. More often than not, it's both. In those moments I feel at peace. The burden of my guilt temporarily removed, shouldered by something stronger. In those moments I feel like I'm scratching the surface of something I know to be greater than myself. I'm not sure what, but I return often to look. I know it’s not hiding under the mats, but buried deep inside myself.

I have a church that I go to. Its floors are black and stained with chalk. Its pews are filled with barbells and bumper plates. Its altar is adorn with kettle bells and jump ropes. The bell rings only when counting down from 3 to 1.  Its congregation is made up of titans with torn hands and grim determination. Our angels are the faint figures outlined in sweat we leave on the ground. I go there often looking for salvation. I know I’m a bad person. But in the confines of my church, I strive to be better. 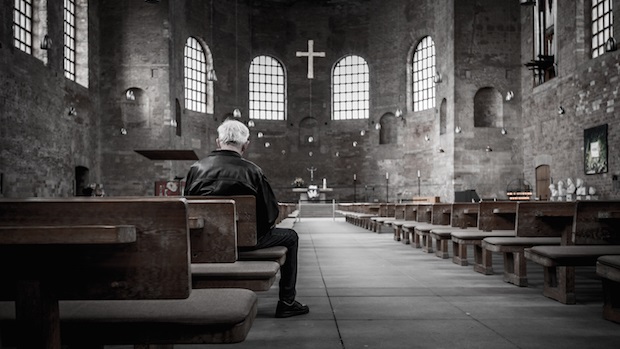